Don't know where to start? The Mass Observation Online team at Adam Matthew pick some of their personal highlights from the collection. 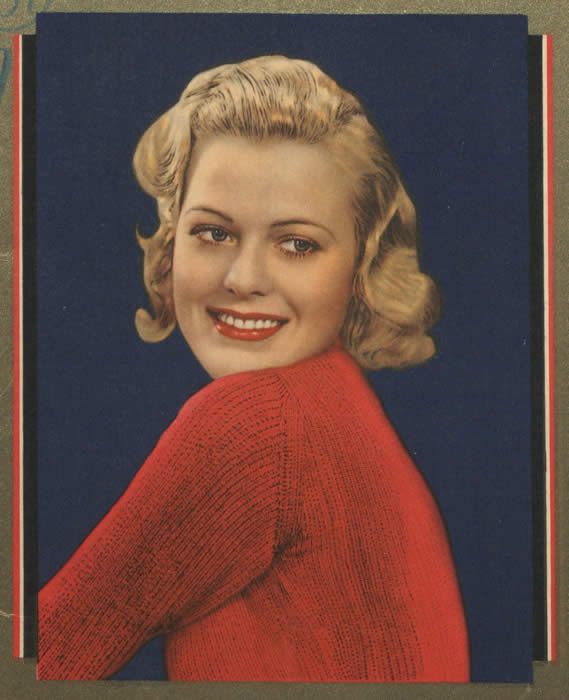 Between 1938 and 1950, Mass Observation staff wrote top-level summaries and conclusions of the material collected by investigators or submitted by volunteer writers. The documents produced were called File Reports. There are over 2,000 file reports in Mass Observation Online covering an immense range of topics. Some of the file reports centred on serious matters such as reactions to the outbreak of war and attitudes to politics, while others investigated more light-hearted matters such as observer’s attitudes towards dirty fingernails and baldness!

File Report A21 is entitled ‘Personal Appearance: Hands, Face and Hair’ and was produced in July 1939. Some of the questions, and their sometimes rather humorous replies, include:

Q - Do you notice other people's hands and how far does it affect your judgment of them? Write notes on your attitude to rings, coloured finger-nails, dirty finger nails. What steps do you take for the care of your own hands?

Q – For both sexes, Do you regard a well-groomed head of hair as an asset socially, for work, for reasons of sex-appeal, of comfort, self-respect, or what? 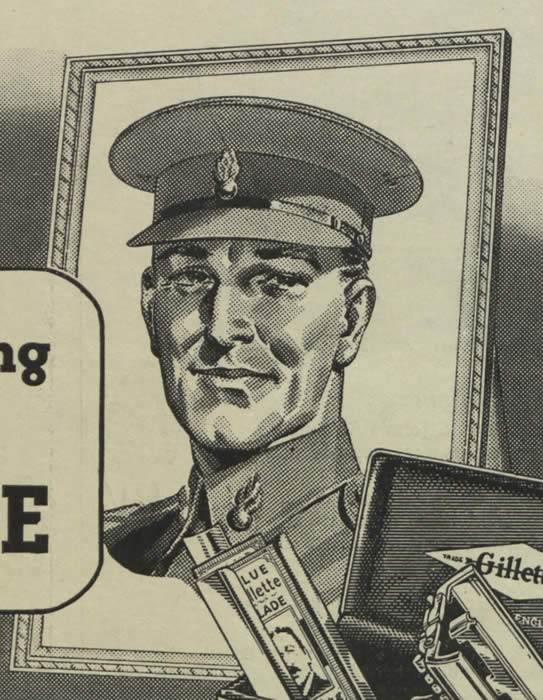 Observers also had something to say about the fear of losing their hair. The report states that ‘58% of the males dislike the idea of baldness and most of the others take a philosophic line about this inevitable shortcoming’. Below the observers have shared their feelings about baldness and their theories for avoiding it:

The file reports are a perfect introduction to a whole range of topics explored by Mass-Observation. Discover the complete set of File Reports here. 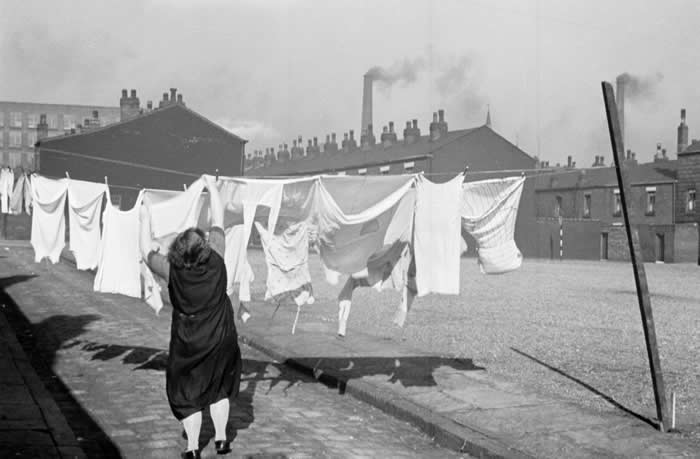 The idea of being a good 1940s housewife strikes a very hollow note with emancipated females of the twenty-first century. We shudder at the thought of being chained to the kitchen sink, eking out the housekeeping money, our every move dictated by the whims of a high-handed husband. But just how accurate is that image? Can we trust it, or is it what we’ve been led to believe by the feminist propaganda of the Swinging Sixties? Fortunately, thanks to Mass Observation, we have evidence straight from the horse’s mouth.

In March 1948, Mass Observation sent out its monthly directive questionnaire to its panel of respondents. Two of the questions were:

TO WOMEN: Do you feel that the men in your household should be expected to help in domestic jobs, or not?

TO MEN: Do you feel that you should do domestic jobs in your house, or not?

The replies – all 346 of them - are fascinating, and often hilarious. Here are some of the men’s responses: 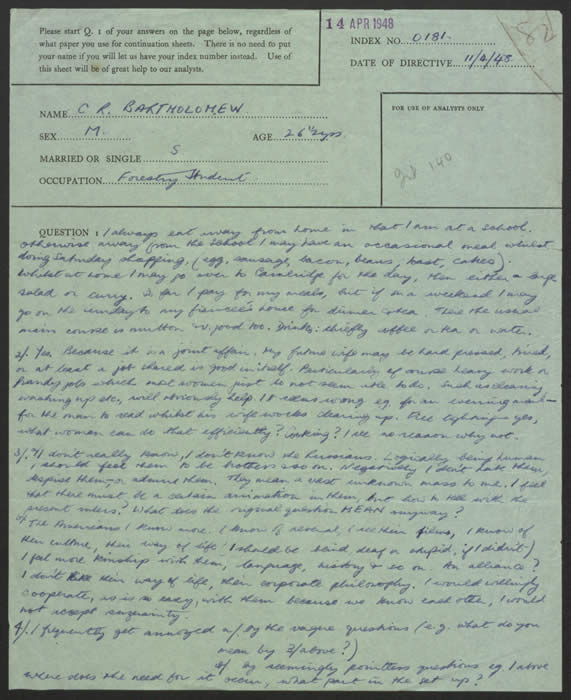 And some of the women’s:

In general, almost every man agrees that he should help his wife or mother with household tasks, especially if she also has young children to look after or her own job to hold down. Although several admit to laziness and only chipping in to keep the peace.

Almost every woman agrees that men should share the work, unless they have particularly long hours or hard physical labour in their day jobs. Most women seem to be content with the amount of help they receive, although some of the more middle class women bewail the dearth of domestic servants since the war.

So the evidence is that splitting housework fairly was more popular than we’re apt to think - although the traditional stereotypes did indeed prevail. ‘Man’s work’ included taking care of the bins, repairing gadgets, chopping firewood, putting up shelves etc. ‘Women’s work’ was, well, everything else! But despite this gender pigeon-holing, Mass Observation has shown us that, when asked nicely, the modern man of 1948 was far more prepared than previous generations to roll up his sleeves, put on a pinny, and peel the carrots.

Children were not exempt from the attention of Mass Observation, as they pursued their surveys of wartime life.  They were observed in their play, at sports day, at school. Their street chalkings were copied and submitted – even the rude ones. Schools were contacted and asked how the war disrupted education and affected the pupils. Pupils themselves were asked to write essays on numerous insightful topics which ranged from naming the finest person who ever lived (answers varied from Jesus to Winston Churchill, passing through Father Christmas and “my dad” along the way), how they felt during air raids, and what they learned at home (making the bed, knitting and worryingly, “I learned to bear pain”). 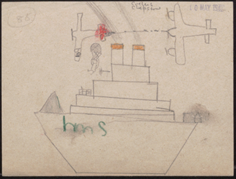 Childhood fears were explored and Observers discovered that ‘the evacuation lady’ held terrifying sway with many.  The fear of being sent away from home to live with strangers was very real for city children, and indeed, many of those who were caught by the ‘evacuation lady’ absconded back to their city-homes.

The ‘evacuation lady’ threat has superseded policemen and bogymen.  The mere mention of this lady is enough to make some children obey the severest wishes of their parents.  This particular child Martin lives in constant dread of the ‘evacuation lady’. Her shadow alone is responsible for his good behaviour. 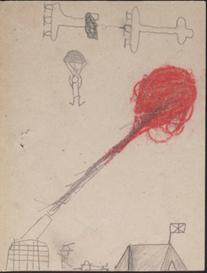 Almost incidental within the Topic Collection on Child Education are the wonderful drawings shown here. Action-filled imaginings of dog fights, battleships and tanks.  The division between ‘goodies’ and ‘baddies’ is of great interest to all small people as they learn about morality, and Hitler was the ultimate ‘baddie’ – a recognisable, permitted, nationally-sanctioned hate-figure.  The drawings show the resilience of children as they translate the tension and privation of their reality into a safer tussle between good and evil straight out of an adventure comic.  The ‘goodies’ always win.  I particularly like the addition of parachutes in all of the pictures, showing the young artists were aware of the human peril involved (although in the picture below the casualty roster seems likely to be high, judging by the frowning soldier in his flaming tank, and the unfortunate pilot caught in the cross-fire).

The war is dreadful.  I think Hitler is a silly man.

Out of the mouths of babes…

Britain and Her Birthrate: A Report Prepared by Mass-Observation for the Advertising Service Guild

The Ordinary and the Extraordinary 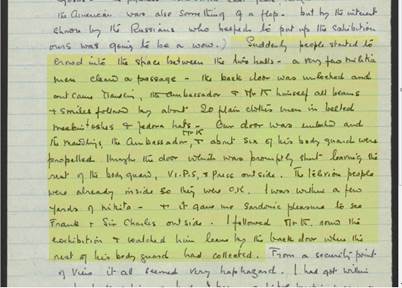 Within the archive there are a few diarists who go above and beyond, recording not only the impersonal details of their lives such as their schedule, what they saw on the news etc. but divulging thoughts and feelings that allow the reader a personal insight into their lives. It is possible to read decades of some of these volunteers’ lives, and know their story in more detail perhaps than some people that we see in our own lives every day.

Mass Observation is a fantastic way of learning about the ordinary aspects that made up everyday life in Britain. However, it also provides a fascinating insight into the extra-ordinary events in the lives of the Mass Observation volunteers. Reading about these events seems even more exciting when it feels as though you have gotten to know some of the diarists, like listening to someone you know tell an interesting story of their brush with fame or history.

An example of this is the May 1961 entry of diarist 5445. The majority of her diaries record life in a small Yorkshire village. Her regular activities in the 1960s include, gardening, shopping, running errands for her husband and son and entertaining friends. This entry however, records something a bit more exotic, a trip to Moscow for the British Industry and Trade Fair. The diarist and her husband, whose company were exhibiting at the fair, flew on an all first class flight accompanied by members of the gentry. At this time it was a small proportion of the British public that took trips abroad and it is an interesting insight into air travel at this time. She reports being a little concerned and taken aback by the presence of air bags on the plane but did enjoy the refreshments of champagne, caviar, chicken and coffee very much.

It is at the fair itself that she has her brush with history. After a look around the trade fair the next morning, she found herself in the right place at the right time as the leader of the Soviet Union Nikita Khrushchev made a surprise visit to the Fair. She delights in recording ‘I was within a few yards of Nikita and it gave me sardonic pleasure to see Frank and Sir Charles outside.’ She also mentions the TV crews following him around. This is interesting as with a quick internet search for the British Trade Fare Moscow 1961 you can find video results which show Khrushchev walking around the exhibition, followed by a horde of men and women. According to her diary she must have been one of these women, but not knowing what she looks like I will never know.

Much of the charm of the archive is that it documents the history of the everyday man, woman and child not simply the often told stories of political figures and celebrities. However, the instances such as this one when the two tales cross provide a fascinating read.